Everything’s bigger in Texas, especially when it comes to football.

A school board in McKinney, Texas, just outside of Dallas, approved a $220 million bond proposal over the weekend, which included the construction of a 12,000-seat, $62.8 million football stadium, according to The Dallas Morning News.

Representatives from McKinney’s school district did not immediately respond to CNBC’s request for comment.

An anti-bond group, Grassroots McKinney, opposed the $220 million bond, which also included band hall expansions at local middle schools in McKinney and a new auditorium at one of the high schools.

While some have argued that the price tag of the stadium is excessive, the town is not the first in the area to petition the local school board to build a multimillion-dollar stadium. 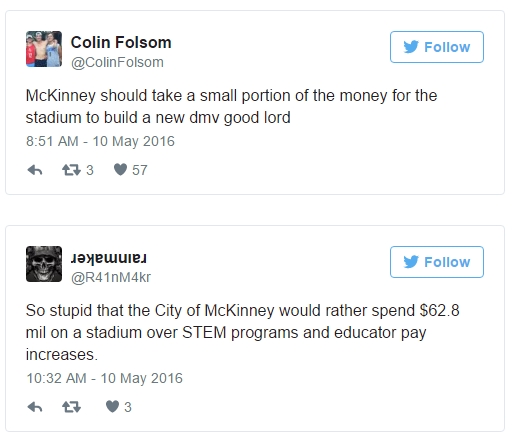 For Texas, where Friday Night lights shine bright, even McKinney’s rivals think the school’s stadium is just too small.

“I think McKinney needs it,” Tim Carroll, director of public information for Allen Independent School District, told CNBC. His school sits less than 10 miles down the road, in Allen, Texas; it garnered international attention in 2012 when it opened an 18,000-seat, $60 million stadium.

Carroll, who has been with the Allen school district for more than 20 years, said that construction costs in a high-growth area like Dallas are high, resulting in big price tags for large stadium developments.

The McKinney stadium wouldn’t open until at least 2018.

Carroll noted that McKinney’s current stadium has outgrown the crowds that come to football games. Allen faced similar problems before it was approved for its new stadium in 2009.

As for away games, Carroll said that Allen supporters arrive at rival stadiums in groups of up to 12,000. A larger stadium in McKinney would also benefit Allen fans.

“A lot of folks in other parts of the country come from areas that have smaller high schools and the first thing that needs to be taken into context when you talk about large stadiums is the size of the schools,” Carroll said.

Allen high school has a student body of 6,400. McKinney is home to three high schools, accommodating around 7,700 students.

And big schools mean big money. Tickets cost $8 in McKinney and Allen’s district, Carroll said. For a school like Allen, that can mean upward of $144,000 in revenue per game just for filling the seats. Some games draw standing-room only crowds, too.