(Article by DeZeen.com, republished from http://www.dezeen.com/2016/02/18/torchys-tacos-restaurant-chioco-design-roadside-architecture-austin-texas-usa/) 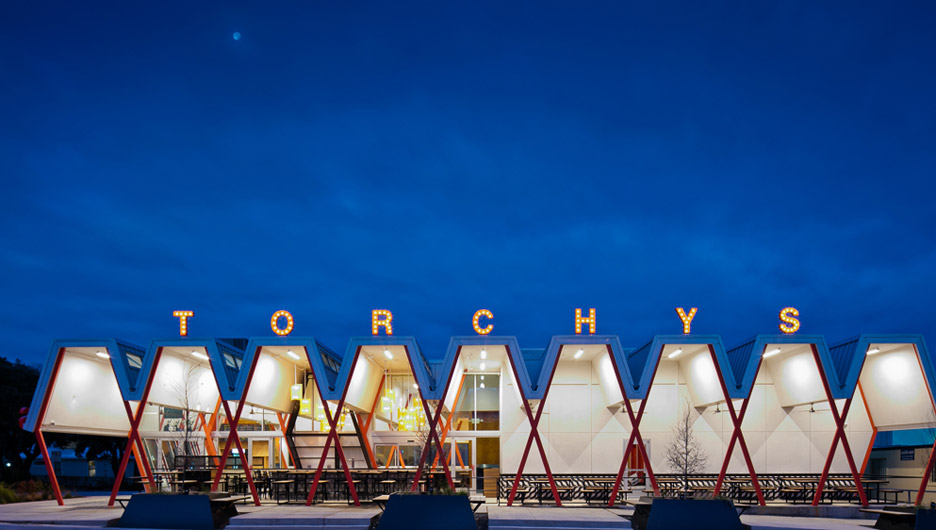 Built on the site of a 1970s burger chain called Fran’s Hamburgers, the new 269-square-metre branch of Torchy’s Tacos features a zigzag profile supported by red-painted structural columns that cross over each other to create X and Y shapes. 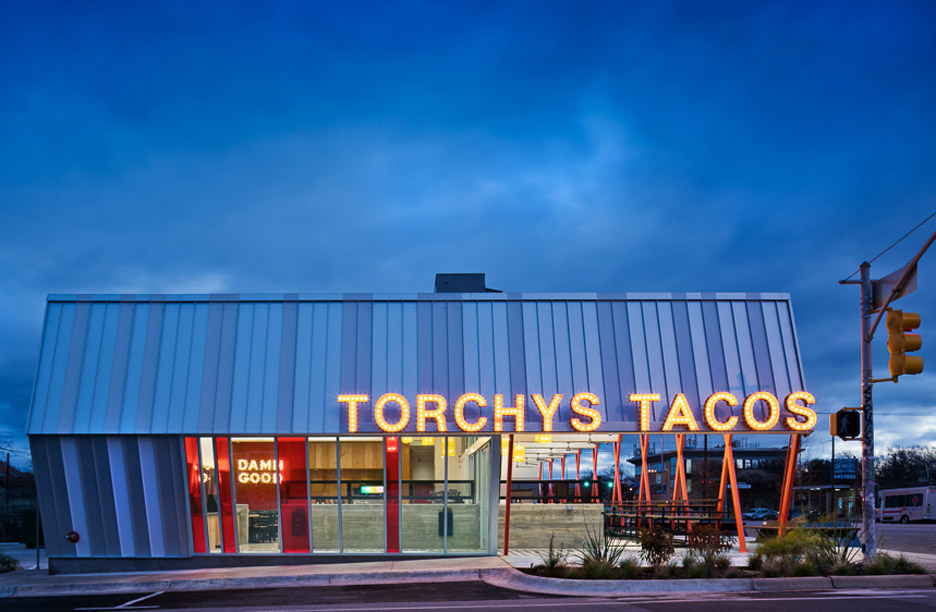 The form of the building was designed to be eye-catching to drivers, with a standing-seam metal roof that folds over one side.

The metal columns provide enough support to extend the roofline out from the building, creating a large outdoor seating area in front of South Congress Avenue, one of the Austin’s most prominent commercial thoroughfares. 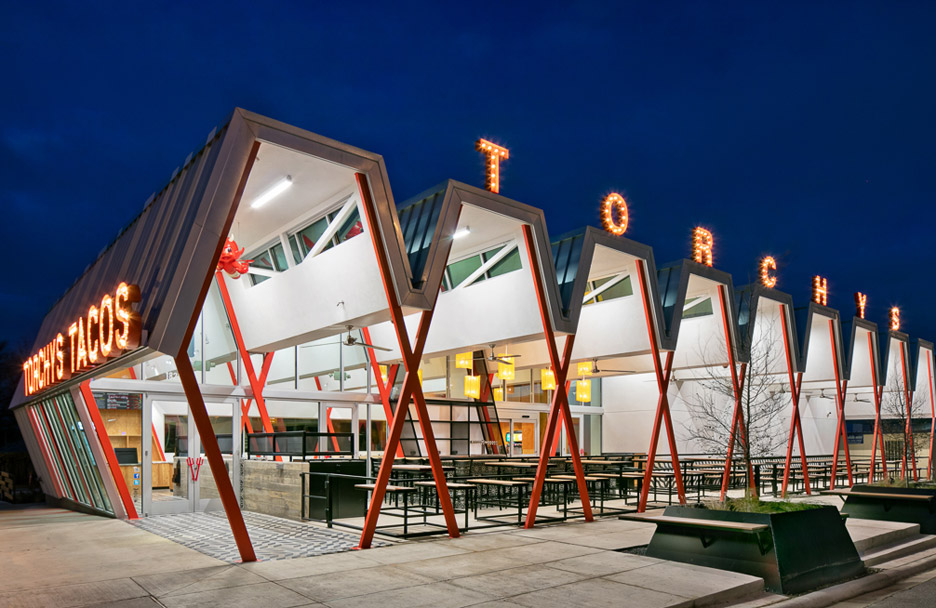 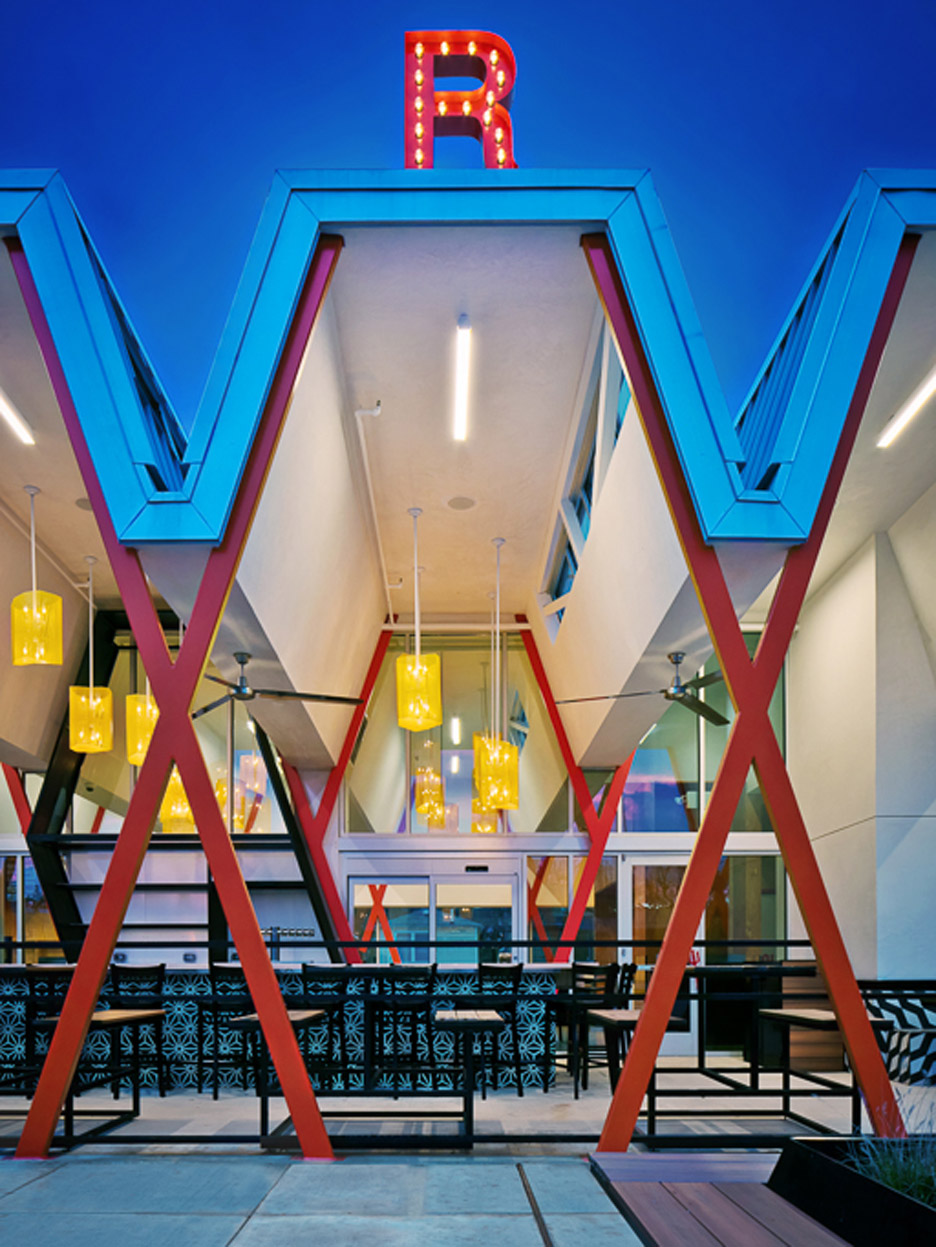 “Chioco Design set out to create a building able to respect its iconic setting, allude to its historic roots and fulfil the needs of a modern restaurant,” the architects said. 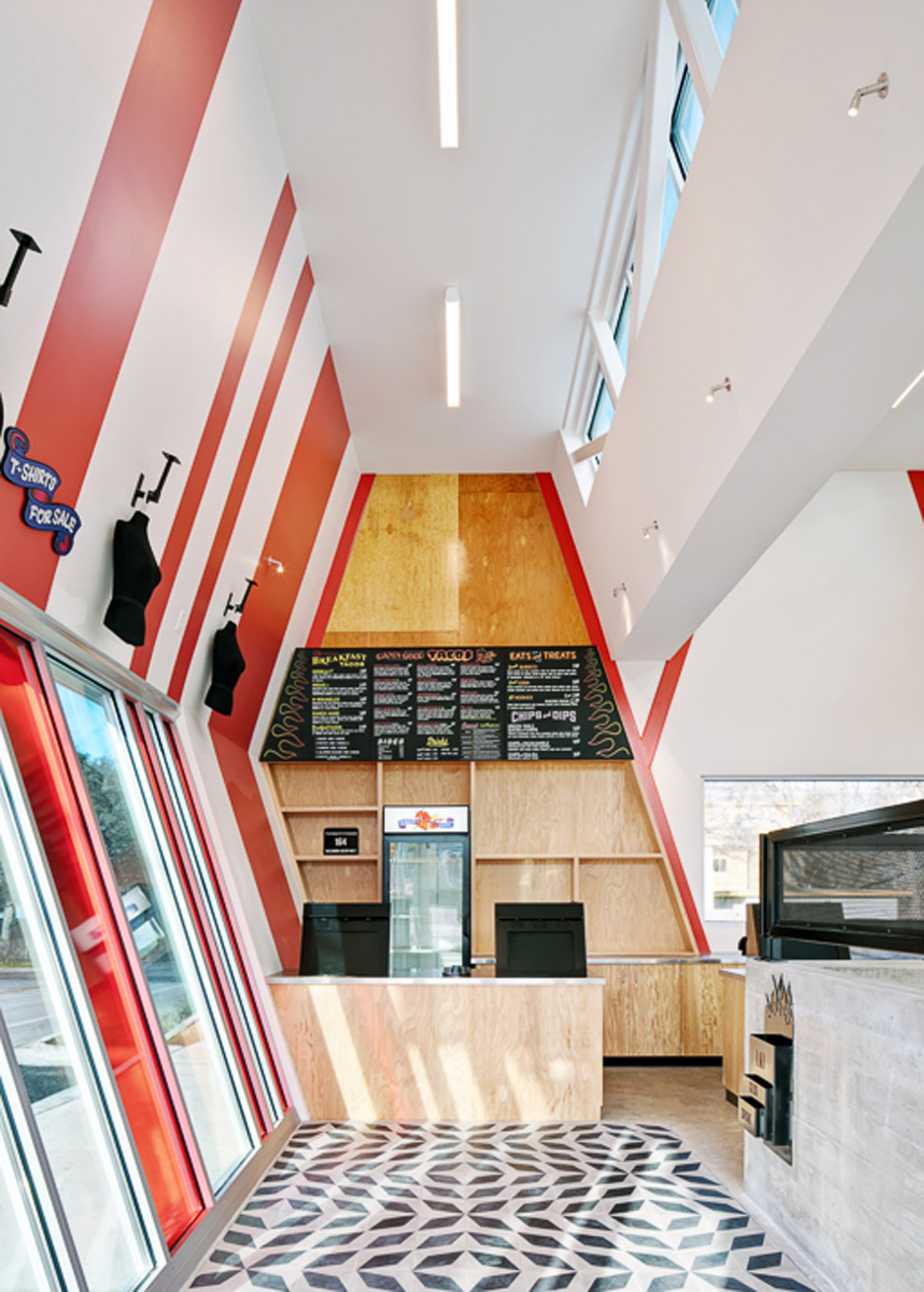 Custom steel planters and tree wells in the sidewalk feature built-in benches, and are designed to further encourage outdoor dining. 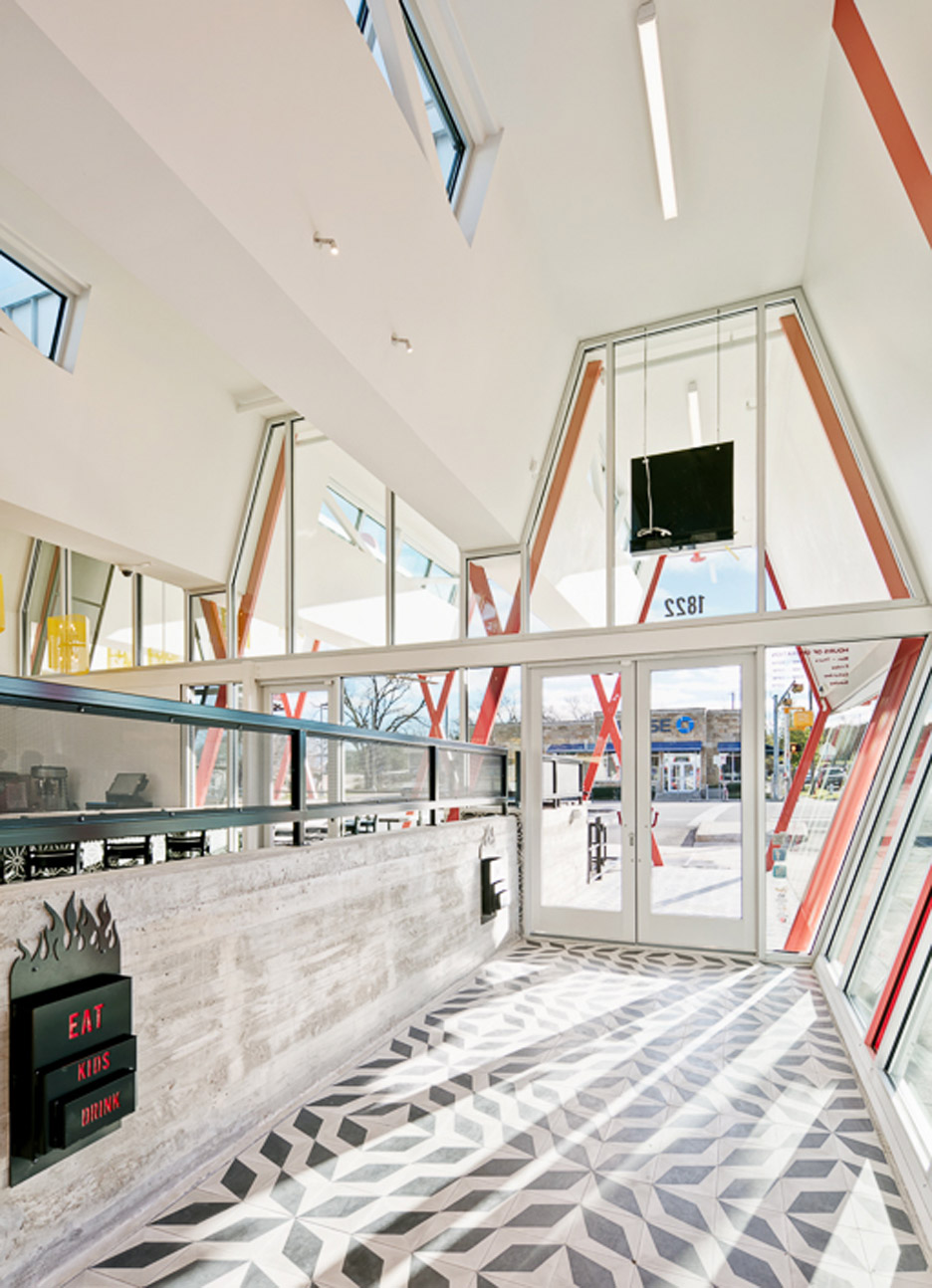 The west exterior wall is covered in red reflectors – small plastic discs designed to reflect light from the headlamps of passing vehicles that are used on guard rails along the sides of roads in the US. 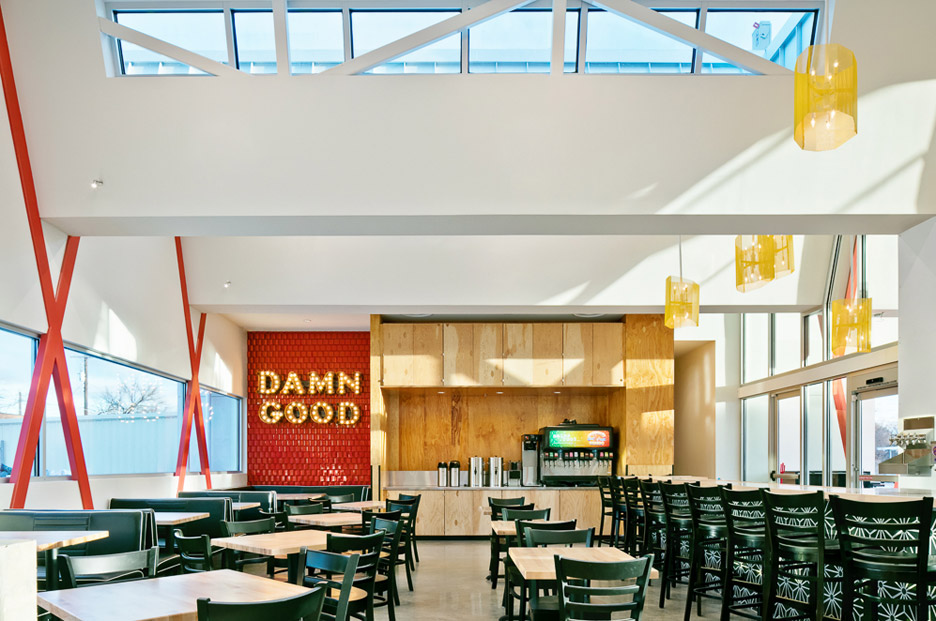 North-facing skylights bring natural illumination into the building without the harsh heat gain that south-facing windows would allow. 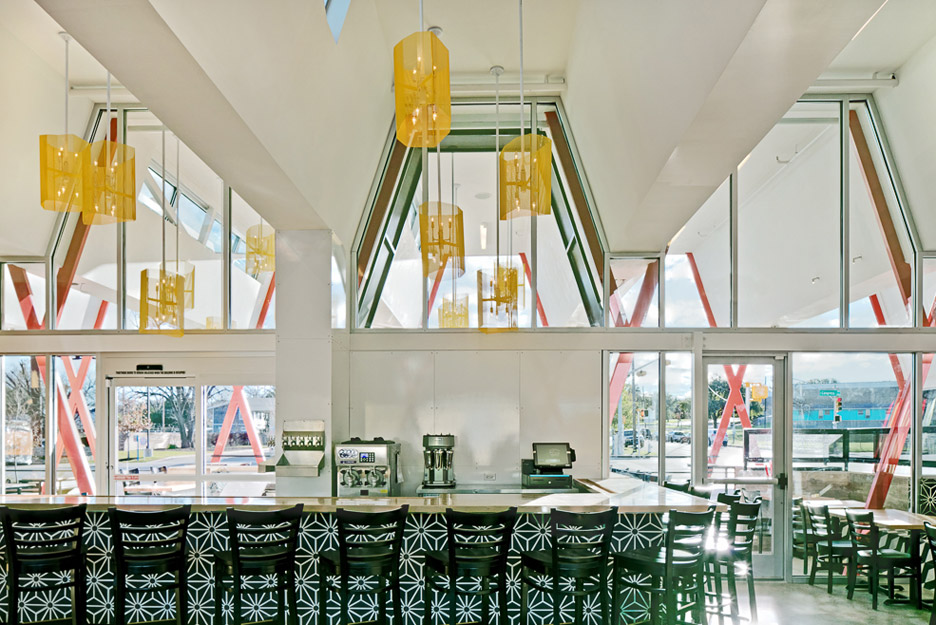 The red structural supports are left exposed inside. Yellow metal pendent lights, geometrically patterned tiles on the counter and a section of the floor, and a red accent wall decorate the otherwise white and grey interior. The rest of the floor is made from polished concrete. 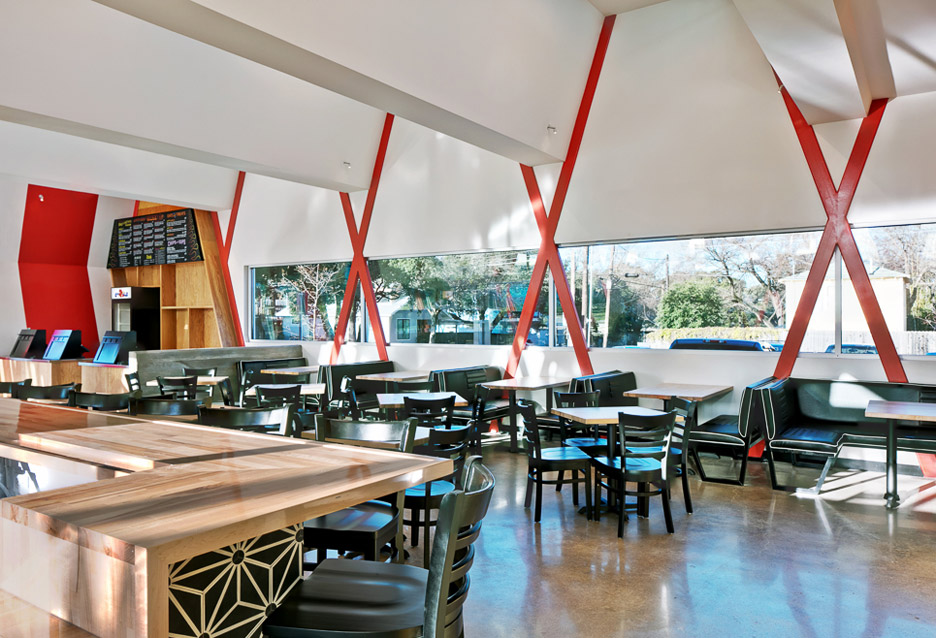 Chioco Design has previously worked on a number of other locations for the chain, all of which have been interior renovations. This is their first ground-up building for Torchy’s.

Based in Austin, Chioco Design has an extensive portfolio of restaurant and residential projects. 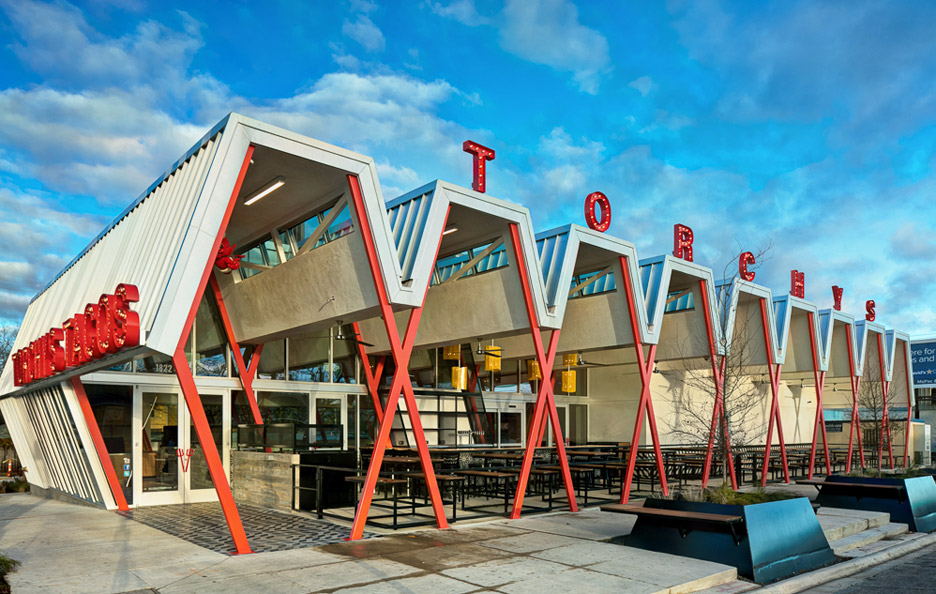 While world-renowned architects like Kengo Kuma and Steven Holl are working in Dallas and Houston, Austin’s architectural scene tends to be more local and low-key, including these modern houses by Alterstudio andAamodt Plumb.